How do I get rid of a wasps nest? 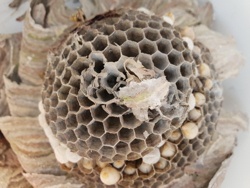 There are several species of wasps that cause problems in the UK. The common wasp and the European wasp are the usual ones that we get in this country. Their habits are almost identical and do not really warrant further discussion here.

Wasps are social insects and live in colonies for most of the season. The nest consists of a queen and sterile female workers. Towards the end of a season male wasps and fertile females are also produced. Following mating the mated female “queens” leave the nest and look for a suitable location to “overwinter”.

In spring of the following year the new queens emerge and look for a suitable place to build a nest. She starts by building a few cells in a small nest to begin a colony. One egg is laid in each cell and the queen feeds the developing lava. After a period of around 30 days the first batch of worker wasps emerge and immediately take over the task of food collection and nest building while the queen continues egg production. Wasp nest sizes will vary, but they often contain ten thousand wasps late August.

Wasps will defend a nest if they feel it’s under threat, inadvertently getting too close to a nest may be enough to causes the wasps to attack. Wasp stings are not only painful but they can often lead to a serious allergic reaction and in rare cases death.

Wasps are without a doubt the most common pest I deal with. Wasp nest removal treatments involve using a professional grade insecticide, injected under pressure in to the wasps nest. The treatment is simple and wasp activity will gradually reduce post treatment until all the wasps are dead.

How do I get rid of a wasps nest?

It would be irresponsible of me as a professional pest controller to give advice on how to treat them yourself. Please always call a professional if you discover a wasps nest on your property.